One of the mysteries that a previous generation has left us is: who are the seven men and one woman named on the Draycott War Memorial as having died in the two world wars?  The memorial sits on the north wall of St Margaret’s Church. 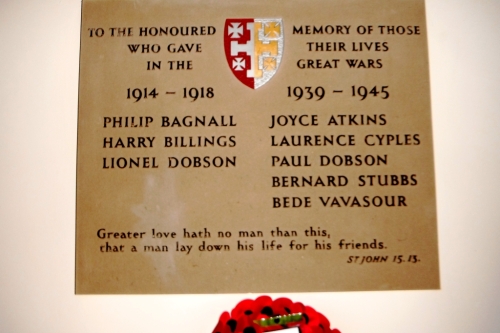 None of the current parishioners seems to remember who the eight are, or anything about them; and there is nothing in church records.  (Well, nothing that has been easy to find!)

And also, in fact no one even remembered exactly when the memorial was put up.  Even the local book about the history of the village is silent on the matter.
But now we think we may have cracked the mystery…

Back to the sixties

One of the legendary local vicars, the Rev Charles Healey, arrived in 1966.  He knew about war, having served in World War Two; and one of the first things he asked for (according to the parish magazine of the time) was that a memorial should be erected in the village.

It took nearly two years to complete the project but in December 1968 (according to the Cheadle & Tean Times that week), in front of a packed church, the memorial, made of Hollington stone, was finally installed and dedicated.  The money had nearly all been raised in the village.
Reverend Healey was quoted as saying: “It seemed to me, since I came first, that it was a disgrace to this village that we have no War Memorial – though NO ONE hates war more than I do”. 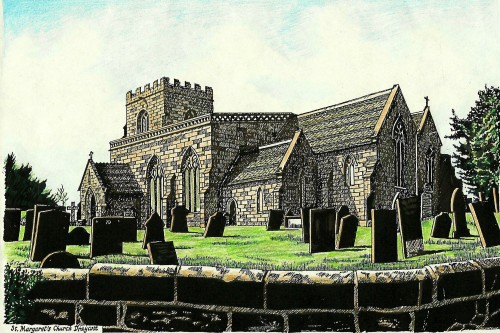 But – who are the three men mentioned on the memorial; and why were they chosen?  The church records are completely silent on this matter.
You’d think the men’s descendants would have been mentioned, especially if they were the ones to nominate them – but there is no note of whether the men still had living descendants in the village in the 1960s.

Next, we tried the military records – but you have to be a real expert to find your way round those, even nowadays, when the records have mostly all been digitalised.
It is a fact too that you do not have to be born in an area to be on its war memorial; there needs only to be an association with the dead man, so you can’t even look in local birth records with any sureness…  (Strangely, this often means that a soldier can be mentioned on a lot more than just one war memorial up and down the land).

So, this is where we say a big Thank-You to Gillian and Alan Talbot, who kindly gave us a lot of time and help.  Gillian and Alan wrote the book ‘Uttoxeter’s Lost Generation’ in which they traced the story of every man from Uttoxeter who fell in the Great War, so they know their stuff.
Their book is fascinating; and you can buy copies of it at the Uttoxeter Town Museum.

So… here are what we all think are the stories of these eight…  We can’t be 100% sure – because the records are not as comprehensive as we’d like – but this is the best guess so far!

Harry Billings
The only Billings that seems to fit is William Henry Billings, who died 21st August 1915 during the Gallipoli fighting in Turkey. He was a private in the 7th Battalion North Staffordshire regiment (no 10431) and just 20 when he died. His parents Eliza Ann and Mathew (a cattleman) lived at Grange End Farm in Draycott (the farm is still there, on the Cheadle Road).  Eliza Ann & Mathew also had a daughter, Sissy, born in 1908.
It looks like Harry was born in Draycott in 1895 – but by age six, in 1901, he is placed as living in Church Broughton (near the Shropshire border).
Grave Reference: Sp. Mem. B. 39.

Philip Bagnall
There is a Phillip Hawley Bagnall listed in military records; and he looks the most likely to be the soldier who is named on the Draycott War Memorial, as he was in the North Staffordshire (Prince of Wales’s) Regiment, 1st 5 Battalion (no 2882).
But, his connection with Draycott is unclear…   This Philip Bagnall was born in 1886 in Stoke-on-Trent to father Richard (a railway goods clerk) and mother Catherine.  In 1911 it looks like he was boarding in Liverpool, where he was employed as a ‘seaman’.
He died in Flanders almost exactly 100 years ago on 30 September 1915, and is buried near Ypres in the Larchwood Cemetery.
Interestingly the CWGC and Soldiers-Died database give his rank as sergeant – but his medal card only says corporal (though with a previous unit as an Acting Sergeant).
Grave Reference: I. C. 5.
[ For even more about Philip Bagnall – click here  ]

Lionel Dobson
The only Lionel Dobson on the CWGC database was in the Canadian Infantry (78th Battalion) … !    A number of British-born men who had emigrated to Canada joined the Canadian army as a way of getting to fight in the war – and this might have been Lionel’s situation. (Canada, as part of the Commonwealth, was automatically drawn into the conflict on the British side).
His parents, Thomas and Annie, lived in Market Drayton in Shropshire, where he was born on January 4 1895, but, again, there seems to be nothing obvious in the UK records to connect him to Draycott.  However, interestingly, the Canadian records list his mother Annie as living in Upper Newton (near Cresswell) at the time of his death.
Private Dobson (no: 148656) was badly wounded fighting in France on 19th February 1917, and died at Rouen two days later.
Grave Reference: C. 18 at Bruay Communal Cemetery, north of Arras.

So, there you have it.  But do you know any more?  One local historian we spoke to says he thinks one Draycott/Cresswell man is missing from the memorial.  Do you know any different? Use the Comments-Box below, or email us, if you can help.
It’s also possible that Totmonslow personnel may be listed on the Tean memorial even though Totmonslow is within Draycott parish.

If you can help with any more information, please email us, or leave a comment below.