At last Staffordshire County Highways and St Modwen Homes have realised how arrogant they have been over their treatment of residents concerning the proposed roadworks on the A521 (at the west end of Draycott Level – see pic below).
Now, a public meeting about the issue has been arranged, for next Wednesday (October 2nd), when St Modwen planners have agreed to meet residents. 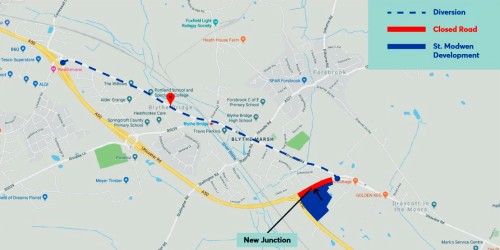 As we’ve been saying in our reporting, the proposed roadworks, which are to build an access to the forthcoming Blythe Fields estate & a pedestrian crossing & traffic lights, will completely close the stretch of dual carriageway (all four lanes) – thus blocking off Draycott from the A50 roundabout.
Diverted traffic will have to go through Blythe Bridge in both directions – a possible nightmare scenario of congestion, as we all know.

The works have now been postponed four times – from Sept 2nd to Sept 16th to Sept 30th, and now to October 7th.

The work is being carried out by St Modwen, but has been authorised and ‘passed’ by Staffordshire Highways Dept.
The work is a necessary pre-condition for the building of the new Blythe Fields housing estate.

The two authorities have handled this situation incredibly badly.
The first notices were issued at the beginning of August, but councillors did not seem to realise the implications.
Only after a series of (unanswered) letters to Highways from this website did the fine details of the works even start to trickle out; and St Modwen did not even directly contact residents until September 9th (a week after the first date to start the roadworks!); while the official ‘alert’ on roadworks.org has been downright confusing and contradictory for months, right up to today.

In mid-September our local county councillors finally took the issue on and met with the two authorities to express residents’ concerns – but it is only in the last two days that the St Modwen have finally made an announcement of this public meeting – and the Highways Dept at last issued a public letter and put an information page about the roadworks on their website.

In their official literature, both Staffordshire County Highways and St Modwen pride themselves on their ‘communication’ – a claim which has been seen to be hollow.

Seven questions at least will need to be answered at the meeting on Wednesday.
1 – Why no contraflow?
2 – Do they seriously not expect the already congested road into Blythe Bridge to become gridlocked?  What provisions have they made for emergency vehicle flow if jams do occur along this strtech of Uttoxeter Road?
3 – What does ’24-hour working’ actually mean? How will it affect the residents near it?
4 – If the ‘alternative parking’ is to be provided for residents on Uttoxeter Road, how far along are they in discussions with the car-park owners?
5 – How far back from the works will motorists be advised that it might be a good idea to turn away and avoid the works?
6 – Why was the communication on this, and the postponments, handled so badly?
7 – When will Highways demand that Roadworks.org sorts out its act?

Contraflow
Many residents have been wondering why a contraflow system could not be put in place – this would mean at least two, or even one, of the lanes of our dual carriageway could stay open, easing the congestion.
But, in an interview with the Times & Echo newspaper, St Modwen have said no – saying that such a move would lead to the roadworks lasting not the planned three months, but twelve months, and that this was unacceptable to local communities.
To be fair, their engineers also claim that deep excavation needs doing (for drainage passages) – which means maximum width work is required.

Of course, cynics might say that St Modwen are desperate to see the roadworks finished as soon as possible, and never mind the congestion. Why?
Because homes are already sold on Blythe Fields, and moving-in dates are promised for the Spring…

24-hour working
To hurry the works along even quicker, St Modwen have gained permission for 24-hour working. The main heavy working will take place between 7.30am and 8pm, leaving light working for through the night. But what exactly is ‘light-working’?

Blythe Bridge congestion
The official diversion is the turn-off opposite Chandni Cottage into Blythe Bridge – past the doctor’s surgery, the Black Cock and the Co-op etc. We all know how difficult this road is for motorists because you have to zig-zag in and out of parked cars. It gets worse when buses need to get through, and even emergency ambulances struggle.
So, to our admittedly untrained eye, it looks only like a recipe for gridlock.

St Modwen are vaguely saying the answer might be to provide some off-road parking for the householders along that stretch, and then encourage them to use it.
They need to be pinned down on this proposal.

Not to be too cynical again, but this meeting looks like just a rubber stamp situation. If the authorities were genuinely looking to consult or explain, they’d have had this meeting three months ago.
However, you never know… and we are always hopeful!

The public meeting takes place at Blythe Bridge Village Hall (next to the doctor’s surgery) on Wednesday October 2nd from 2pm to 7pm, and all are welcome.

***
Want to comment on any of the items on this page?  Just use the comments box – just a bit further down this page.
(The form will ask if you wish to put in your email address.  You don’t have to – and it is always kept private anyway and never published -, but, if you don’t add your email address, that means you might miss any responses to your comment)

Do you have news or information snippets that you think residents would like to see up on this website? If so – email us

Like Loading...
This entry was posted in development, infrastructure and tagged A521, Blythe Fields, St Modwen Homes, Staffordshire Highways. Bookmark the permalink.