There is good evidence that there has been a settlement in Draycott-in-the-Moors for around two thousand years – right back to Roman times. So…that means a lot of history!

The good news for local history enthusiasts is that there is going to be a History Walk round the village sometime this summer, probably in July.  The ‘Blythe Bridge & Surrounding Districts History Society’ is organising the event, and all will be welcome when it happens.

However – first comes the research!  Working alongside people from the village, the society members are pulling together a list of the places & sights here that would be essential for a decent history walk.
And here is where YOU come in.  What places would you suggest should be on a history walk of Draycott – Cresswell – Newton – Totmonslow? And why would you suggest them?
Even more, are there also local historical mysteries that you would like to see researched?
What we’d like is if you’d drop us an email with your suggestions. 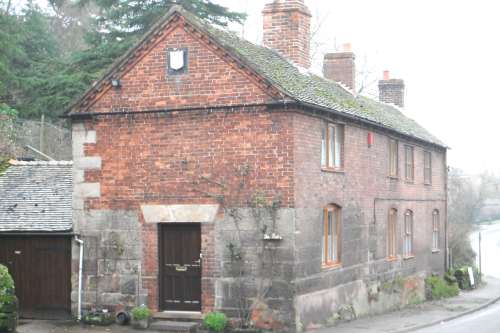 Ancient barn (now a home) opposite The Draycott Arms.  What was it used for? What does the old shield on it represent?

But first, here are some thoughts and puzzles that a group of us came up with while thinking about it in the pub.

Some places to visit are obvious – like the two churches – but what about some less obvious places?   Here are just some…

By Painsley Farm are the ruins of the old Paynsley Hall (now on private land).  Would it be possible to go there?
The strange holes in the rock-face behind The Old Post Office – could they have been made by Roman soldiers?
The barn building opposite The Draycott Arms bears an old carved shield on its end – what is the story behind that?

The Old Rectory, the grade-2 listed home just up from The Draycott Arms on Cheadle Road, is redolent of history.  Can the walk-organisers get permission to see round some of it?
In Cresswell, along the dirt track opposite The Izaak, are some grown-over large building blocks: are the remains of an old mill?

What other less usual historical sites round here do you think the history society should be aware of?

At one time red sandstone was quarried around here – but where?
A stone with a strange design has been incorporated into the out-buildings at Totmonslow Farm.  Does it have a meaning?
Totmonslow was the centre of a Saxon administrative area – but where is the site of its famous ancient meeting house – the ‘hundred court’?
Where was the Draycott race-course?
Under gardens in Rookery Crescent there appear to be remains of air-raid shelters.  Is that what they are?
What happened to the large painting of The Assumption that was in St Mary’s until the 1960s?  Where did it go?

Can you suggest any other local history mysteries which the history society can try to research?

All suggestions welcome – no matter how vague!!  Every bit of research starts with a simple question… Email us with your ideas – or put your thoughts into the comments box at the bottom of this page.